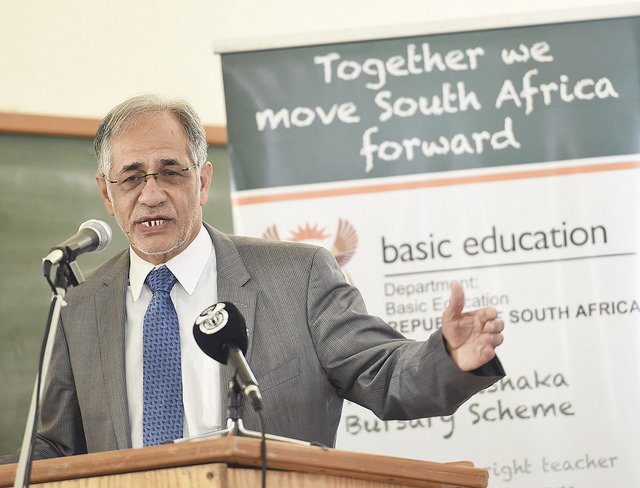 Surty spoke from the heart, rather than from the script and delivered a most engaging and informative opening address in the school’s main hall.

He acknowledged “the enormous contribution by SchoolNet in the ICT domain” asserting that “ICT is becoming more critical and central to the facilitation of teaching and learning”. Surty then demonstrated the department of education’s holistic approach to digital learning by describing the various streams of the Operation Phakisa framework as well as government’s efforts to digitise content effectively and in an interactive format.

Surty further revealed his knowledge of the value of the type of professional development that SchoolNet has always advocated, by noting that he was not referring to the computer literacy of teachers but rather to the higher, innovative levels of teaching, integrating ICT “ïnto the curriculum”.

He discussed the strides that the Department of Basic Education (DBE) has been making around school administration and the use of data-driven decision making. In particular, he noted the Learner Unit Record Information and Tracking System (LURITS) which aims to collect data for each learner in South Africa. Interestingly and crucially, Surty mentioned the ability of LURITS to track the impact of teacher absence on learning and learner achievement.

He pointed out that the department had listened to stakeholders and experts in the field whose interventions had shown the positive impact of ICT on learning. When asked what support would be provided to provinces that were not making progress in crafting plans for implementation, the deputy-minister outlined the digital resources that were available to all provinces and said that his department was fully aware of challenges facing the so-called “Cinderella” provinces.

Surty pointed out that whilst Western Cape was the most effective out of all provinces at monitoring the use of the interactive workbooks, other provinces had made notable strides including the Free State which had broken “the ceiling of 90% matric pass rate”. The deputy minister made reference to two previous SchoolNet Conferences that he had opened in the Free State province during the last 10 years.

Thomson asked how the new Professional Development Framework for Digital Learning, being disseminated by the national DBE, was going to benefit teachers, bearing in mind that teachers seldom access policy documents. Surty was quick to acknowledge that both teachers and learners must have access to both technology and connectivity.

He went on to explain the impetus for the professional development framework and the need to standardise and reach a common understanding of minimum requirements, in teacher competencies for digital learning, particularly pedagogical competencies, across all interventions and initiatives in all provinces. This would include minimum requirements for teacher education qualifications.

At the end of the address, delegates felt they were being treated to a real-life insight into the national department´s thinking. Not only was the address directed at teachers and the most critical issues facing them currently but it also outlined the forward planning and wider policy development around digital learning for South Africa.

The deputy minister included a tribute to Oliver Tambo and conveyed a broader message for our overseas presenters who were most appreciative of the national and continental context provided.

For the full interview with the deputy minister, visit the SchoolNet YouTube Channel: https://youtu.be/uK9xWNKxAZk

Janet Thomson is the executive director of SchoolNet.