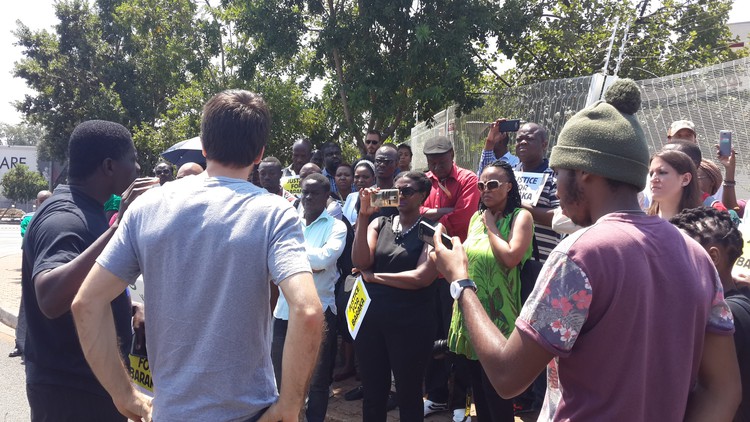 African Diaspora Forum (ADF) Chairperson Marc Gbaffou, told a crowd of about 50 people gathered outside Sophiatown Residence on Monday that ADF would be sending letters of demand to the police and the University of Johannesburg (UJ).

This comes after a Tanzanian Economics PhD student, Baraka Leonard Nafari, was allegedly bumped and killed by a taxi driver outside Sophiatown Residence on 23 February.

City Press reported on Friday that Nafari’s colleague had seen the CCTV footage from UJ Campus Security. He said it had shown Nafari and his friend being chased by a taxi. He told City Press that the taxi deliberately struck Nafari against the residence’s fence which killed him.

Gbaffou said the letter to UJ would demand that it pays for the transportation of the body back to Tanzania, full cost of the funeral, damage to the family and a private investigation. He said the letter to the police would be a test for the newly appointed Minister, Bheki Cele, on how he deals with crimes against foreign nationals. He said UJ and the police would be given 30 days to respond.

Gbaffou said he wanted to make it clear that Nafari’s death was not an “accident” and that it was a deliberate act of murder. “Baraka was a human being like you and me. Someone decided to take his life and that person cannot be out [of prison] like you and me … we are asking for justice”, said Gbaffou.

He said it was unacceptable that the taxi driver had been arrested for driving without a license and was let off on bail. He also questioned why UJ took about a week to release a statement on Nafari’s death and to provide the CCTV footage to the police.

Student Representative Council (SRC) Chairperson Letlhogonolo Maimane also addressed the crowd. He said the SRC was “highly disappointed in law enforcement’s inability to deal with this case”. He said the case was not receiving the necessary attention but it should not be politicised because a life was lost.

“We will be liaising with the university to ensure that justice is served”, said Maimane.

But Claire Ceruti, a former UJ student, said the case was “highly political”. She said the university had spent “millions if not billions” on security around campus but students were still not safe. “This was not an act of God … his life was ended prematurely”, she said.

This article was first published by GroundUp

The Department of Basic Education says 90% of the marking of matric exams has been completed, four days before the scheduled cut-off date. Briefing the...
Read more
Opinion

AFTER 20 years of teaching academic writing to both native speakers and English language learners, I can attest that at some point, just about...
Read more