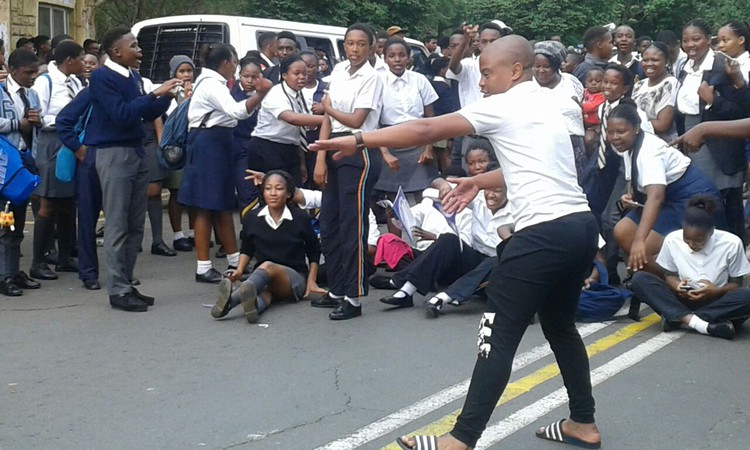 Mandisa Cele was one of a group of high school learners protesting outside the Pietermaritzburg taxi rank on Wednesday, demanding to be left alone to choose their own means of transport.

Learners from schools in the Northdale area said taxi owners were bullying them into using only taxis.

Many learners use private vans or cars driven by “omalume” (uncles) with whom families have contracts.

On Tuesday, uniformed security guards accosted learners and forced them to use taxis. Those who could not pay taxi fares were forced to walk from school in Northdale back to town.

Cele, who is in grade 12, said, “uMalume was forced to leave without us. Some of us had no money for the taxis. We were forced to walk from the school to town. We have the right to use transport that we are comfortable with.”

Sabelo Mtshali from Camperdown said he felt safer in private transport and it was cheaper.

“If I were to use a taxi, I would be taking four taxis daily. With uMalume I’m paying R750 a month. A taxi costs R1,000 or more. I live with a granny and I depend on her grant money for transport. She pays the money in instalments with omalume. They have an understanding which is not an option on daily taxi transport,.” he said.

Thabani Dube, one of the private drivers who transports the learners to school, said he did not understand why taxi owners were fighting with them. “There is no need for a fight. Everyone is doing his or her job in their own space,” he said.

Dube transports children who live in Imbali, Esigodini and Dambuza to school and back home.

“Students have missed school today. Students were removed from their transport by the [taxi] owners. Our cars were not allowed to transport any student,” said Dube.

“We prefer private transport,” said learner Nelile Zondi. “With taxis we are always late … We get detention or we are sent back home … We don’t want to use taxis. Taxis squash us. With our transport we sit comfortably.”

“All that we want is that they get permits,” he said.

He said some taxi owners might have been “impatient”.

“And I am not aware that security guards stopped learners from using their own preferred transport,” he added.

Deputy General Secretary of Equal Education Ntuthuzo Ndzomo said students should be allowed to exercise their right to education.

NYAKALLO TEFU| SCHOOL Management Teams (SMT) across South Africa will resume their duties this week in preparation for reopening of schools in February. SMTs include...
Read more
Opinion

CHRIS BRINK| A PROFOUND change is taking place in our understanding of the mission of higher education. Increasingly, we have realised that academic freedom...
Read more

STEM Education Must Be Reformed To Engage Indigenous Youth