How South Africa can align its development plan with the SDGs 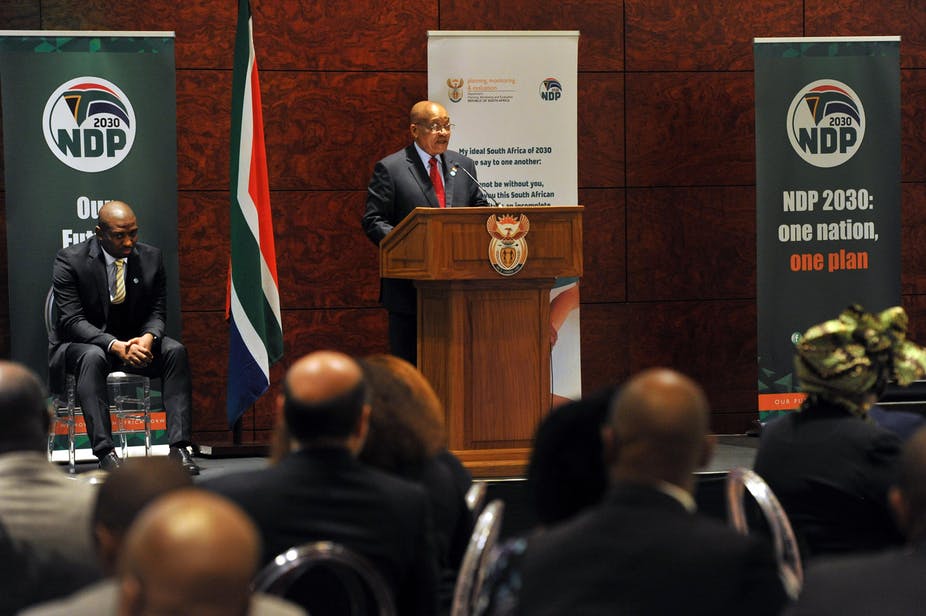 Both developed and developing countries are faced with this challenge. This is exacerbated by the SDGs’ integrated nature and the related challenges of measuring, monitoring and communicating progress. In Africa, a plethora of home-grown development goals, encapsulated in national development plans and visions, have emerged during the last decade.

Kenya, for example, adopted its Vision 2030. And at a continental level the African Union adopted Agenda 2063. In most cases these national or continental development plans are accompanied by detailed implementation plans.

In South Africa, policymakers need to align the country’s National Development Plan (NDP) with the SDGs. The NDP is South Africa’s long-term development plan. It expresses consensus on societal challenges, focuses the national planning system and has the potential to implement development priorities in a more effective way.

The plan is primarily implemented through five-year Medium-Term Strategic Frameworks. The current one prioritises 14 outcomes, ranging from quality education and health care to an effective public service and rural development.

But aligning South Africa’s national development plan and the sustainable development goals will have its fair share of complications.

South African policymakers must consider how best it can be done. One possible route is to turn to the Policy Coherence for Sustainable Development movement which is regarded as the industry standard for creating policy coherence. It initially focused on creating policy coherence for countries receiving foreign aid. But this weakness, namely using policies of developed countries as point of reference, has being corrected in the post-2015 development era.

A number of challenges face South Africa in aligning its domestic development plan and the SDGs.

Firstly, the plan was adopted before the 2030 Agenda. Superimposing the global agenda onto the local plan is politically problematic because it can’t be changed without seriously damaging its legitimacy.

This is certainly the case in South Africa. The country’s development plan explicitly and understandably seeks to address injustices resulting from its apartheid past. This includes improving the poor quality of education for black people, strengthening national infrastructure, uniting the country and creating employment.

The 2030 Agenda and its SDGs do not mention the peculiarities of the South African – or any other national – context.

The good news is that the Policy Coherence for Development movement can help as countries try and bring the two together.

Developing countries have been wary of this approach given its genesis as a product of the Organisation for Economic Cooperation and Development’s Development Co-operation Directorate. In its early days it had a strong donor bias and impact was defined mostly in terms of the interests of donor countries.

But after the adoption of the 2030 Agenda in 2015, the donor-bias was addressed by emphasising sustainable development. This signified a sea-change in the movement itself.

At least five of the guidelines it uses could be helpful to South Africa.

The first is the movement’s emphasis on political buy-in without which policy coherence isn’t possible. It might be helpful for South Africa to rekindle the political momentum that was achieved when it was involved in negotiations for the global adoption of the 2030 Agenda. As joint chair of the G77 and China it played an important role in finalising the agenda.

The third useful guideline is the emphasis on using existing institutional structures and processes. There’s no need to reinvent the wheel. Rather existing structures should be organised in the most efficient way. This should result in a coordinated effort to improve policy coherence that includes various government actors and stakeholders.

Another is the country’s statistical body as well as the Department of International Relations and Cooperation which coordinates South Africa’s international obligations.

The fourth guideline takes an issue-based approach to policy coherence by suggesting cooperation across government departments and across sectors. This is difficult but important. The notion that development priorities are interconnected is a defining characteristic of the sustainable development goals, and also characterises South Africa’s national development plan. But using an issue-based approach will be of no avail if it’s not coupled with making the best use of existing structures and processes.

The fifth guideline has to do with encouraging governments to look beyond the short-term. The effect of policies should be viewed beyond the present generation and beyond national borders. Many governments find it difficult to include long-term and transnational impacts into their policy making processes. But they should because issues such as climate change aren’t constrained by national borders and affect the flow of people and of goods.

There isn’t a panacea to aligning national and global development goals. It will remain a difficult thing to do. Yet, its difficulty doesn’t mean that it’s not important or that it’s impossible. On the contrary: the policy coherence for development movement is based on the assumption that inclusive and sustainable development depends on coherent policies.

THE COVID-19 pandemic has plunged South Africa’s schools further into crisis, exposing how the country’s education system continues to be shaped by the legacy...
Read more
News

EDUCATION activist Hendrick Makaneta has called on the National Student Financial Aid Scheme (NSFAS) to publish all qualifications that will not be funded on...
Read more
News

NYAKALLO TEFU| WITS University has announced the start of the 2021 academic year on Monday for over 35 000 registered students. The university also said that the...
Read more