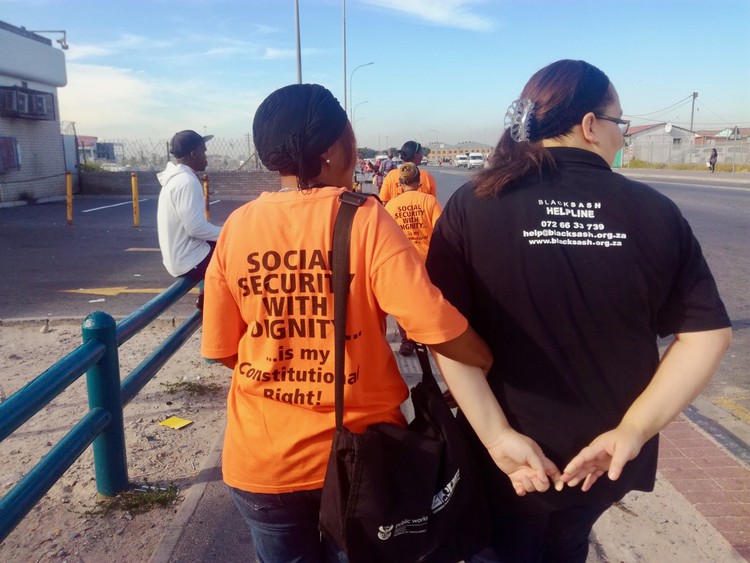 In the days leading up to 1 April, Delft resident Godfrey Classen was worried that he would not receive his pension.

Cash Paymaster Services’s (CPS) contract with the South African Social Security Agency (Sassa) came to an end on 31 March. The South African Post Office (Sapo) is currently being phased in as the new service provider.

It has taken over the payment of grants, except for cash. CPS will continue paying cash recipients until 30 September.

On 28 March, Sassa announced in Parliament that over 5.4 million beneficiaries, who get their grants at merchants and ATMs, will for the first time incur a R10 deduction for banking fees levied by Grindrod Bank.

In a media statement last month, Grindrod stated that the deduction was due to Sassa withdrawing its subsidy.

Sassa has called the claim “disingenuous”.

These changes, announced days before grants were to be paid in April, left many beneficiaries confused about what to expect.

Claasen was among a group of beneficiaries at a Sassa pay point in Delft on Wednesday, 4 April (the day of the second cash payment). He said R10 had been deducted from his old age grant, along with his usual loan repayment and monthly life insurance payment.

“I used to have a green card, but last month I changed back to the Sassa card. I’m just glad we were paid,” he said.

Last week, GroundUp joined the Black Sash at the Delft Community Hall pay point. Since 2013 the Black Sash has been closely monitoring the payment of social grants.

Pensioner, Maggie Pienaar, 66, said she was shocked by the R10 deduction. “I’m meant to get R1,690, but the teller at Shoprite only gave me R1,680. I asked her why it’s R10 less? She told me she couldn’t explain it, but they had to take it off the card. That could be money for a loaf of bread or electricity. They should have told us about this long ago,” she said.

By 9 a.m, over 150 people were seated in snaking queues inside the hall. Mary-Ann Petersen was wearing a conspicuous green bib.

She has worked as an usher at the pay point for the past two years. She said she was “used to the craziness of pay days”. She said many beneficiaries waited outside the hall from as early as 5 a.m.

“It was hectic here [on Tuesday] because disability and pension [grants] were paid. There are usually up to 170 people sitting here waiting. I have to prioritise people who are very old or sickly and that can cause delays,” she said.

Outside the hall, Black Sash monitors noted that there was some confusion around the R10 deduction. Amanda Ismail said they were happy that grants were paid but would continue monitoring the process during the month.

“Some people were still worried that they wouldn’t get their grants and weren’t sure if they now needed to open accounts at the post office or at banks. We still don’t think beneficiaries should bear the brunt for what Sassa decided,” she said.

Leaving the hall were Yvonne Jacobs, 64, and her adult son Tyrone. Jacobs said she had withdrawn her full pension of R1,690 from an ATM earlier in the week, but she was at the hall to reapply for child support grants for her four grandchildren. Her daughter died last month. She had arrived at 5 a.m. and was assisted four hours later, at 9 a.m.

Loans across the road

The Black Sash also visited a money-lending company called Super Loan Financial Service at the Delft Mall, across the road from the hall.

On the storefront window were National Credit Regulator and Sassa stickers.

Inside, the teller was handing out Sassa-branded forms to be filled out when beneficiaries want their grants paid into a private or commercial bank account. The teller explained that they could only assist beneficiaries with loan applications once the form had been completed.

When we asked to speak to the store’s manager, the teller said there was no manager. He then continued talking to the customers in the store about the Sassa-branded form.

Ismail said, “We have been hearing cases like this where some people, mostly loans sharks, are filling out these banking mandate forms because they [grant recipients] are so desperate to get money. We found this happening at some money lenders in Paarl. We warned them [beneficiaries] not to allow it,” she said.

On Friday, Shivani Wahab, Sassa Western Cape spokesperson, said a total of 910,813 social grant beneficiaries were successfully paid to date. “This was at various payment channels including 262 pay points, merchants and ATMs. There were no glitches reported,” she said.

In response to questions about loan sharks using the banking form to entice beneficiaries, Wahab said that Sassa was aware of companies preying on beneficiaries.

“Sassa has repeatedly appealed to all beneficiaries to not engage with any third party company to secure loans against their social grants. Any third party utilising the Sassa brand for unauthorised marketing purposes must be reported immediately either to the Sassa Toll Free line at 0800601011 or the Sassa Anti-Fraud Hotline at 0800 701 701,” she said.

THEBE MABANGA| WHEN South Africa entered the global mainstream of the Covid 19 pandemic with the confirmation of the first positive case in March...
Read more