South Africa: Teachers to be vetted for sex predation, violence and racism 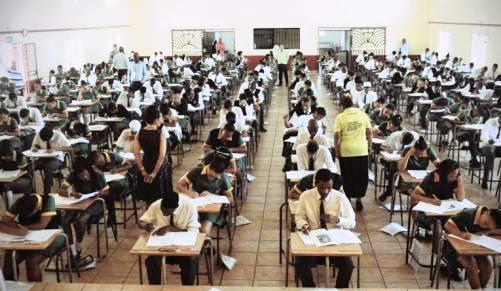 “As a former Parktown Boy, the culture of Parktown Boys is very patriarchal,” said Max a caller on 702 on Monday morning.

“When I was in Standard six (Grade eight) in the 90s, part of the initiation, we would have to have sex on the school lawn,” said Max

“I was hung upside down from the first floor and shaken until all my tuk [tuck shop] money fell out.

“For one week I was put in a box during the entire break. Its impact on the psyche is profound,” said Max who was in tears as he recalled these school memories from his childhood.

Max had called into 702 FM on the Eusebius McKaiser mid-morning show. The MEC for Gauteng Education, Panyaza Lesufi, was in studio to discuss the issues faced by the Provincial Department of Gauteng Education.

Sexual predation, racism and violence at schools were some of the issues covered.

In April, Lesufi called the meeting in order to discuss the findings of a report by the department following the allegations of sexual assault, rape, racism and violence at Parktown Boys.

One parent, who had been given carte blanche by the headmaster and School Governing Body (SGB) to investigate the allegations, said that when her evidence was presented to the headmaster and the SGB, they allegedly tried to conceal the information.

The Rosebank Killarney Gazette reports that the woman said: “I was here from 2014 and I have witnessed first-hand what has happened to our boys. One child was too much. Thirty-two were evidenced, properly damaged, anally penetrated every night,” alleged the parent.

She added that the impact the abuse had had on the learners had been severe.

“We have suicidal boys, wanting to jump off of buildings because they have to smile and wave, put on the boater [hat] and uphold the Parktown way.”

Nine teachers were implicated in allegations of racism and sexual assault in the department’s report presented. Law firm Fasken Martineau compiled the report.

In 2017, the school’s assistant water polo coach appeared in the South Gauteng High Court in Johannesburg for sexually grooming more than 20 pupils. The 22-year-old, who was also an assistant boarding master, faced 160 charges, including sexual assault and attempted murder.

The complainants were all child victims, aged 15 and 16.

Max tells Lesufi and McKaiser that he had buried the memories of what happened to him very deep in his psyche.

“They are only coming out now because of what has been happening over the last few months,” siad Max.

Lesufi says Max’s story is part of the reason his department has banned orientation programmes and initiations rituals at boy schools.

This was in reference to the culture of silence at the school.

In May, Lesufi instructed Parktown Boys’ SGB to review the culture of silence and expressed the need for the establishment of a new code of conduct.

He declared in front of learners and educators that the code of silence no longer exists but a new code will be formulated.

“If anyone is aggrieved they have a right to complain,” Lesufi said.

During the 702 interview, Lesufi said the education system must make sure that our children are free from harm and violence.

He added that his provincial department just won a battle last week with the teacher unions.

“From 1 July, every teacher that becomes appointed must go through a vetting process. This is a four-step vetting process to vet: sexual conduct, violence, racism and issues that will not harm our children,” he said

Lesufi added that his department would work together with government institutions and agencies that deal with human rights, gender commissions, security and the criminal justice system to ensure the perpetrators are pegged before they get into the system as educators.

Mckaizer added that there was a designed and institutional cultural problem that has been going on for a long time at Parktown Boys and other boy schools.