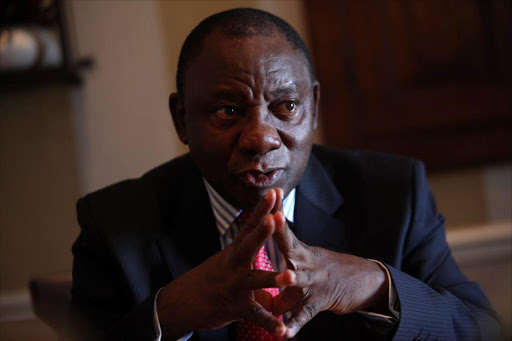 President Cyril Ramaphosa  launched a new Sanitation Appropriate for Education (SAFE) Initiative between the government and private sector on Tuesday.

The initiative aims to fast-track the eradication of pit toilets in the country’s schools.

Ramaphosa said pupils will be spared the dangers of using pit toilets.

“But today is also a day when we demonstrate solidarity. Solidarity of how various partners can get to together and respond to a national need, an urgent need.”

In March 5-year-old Lumka Mkhethwa (Viwe Jali) fell to her death into a pit toilet at her school in Bizana in the Eastern Cape.

Michael’s lifeless body was discovered by his mother on January 20, 2014. His hand protruded from a pool of human excrement in one of the pit latrines at Mahlodumela Lower Primary School in Chebeng Village, Polokwane.

The school principal had written numerous letters to the Department of Education in Limpopo asking for new toilets to be built for safety reasons.

Equal Education wrote that over 9000 schools in South Africa use pit latrines. The organisation said that these were the only forms of toilets at these schools.

The department of basic education has the number at 4000.

Ramaphosa launched the Sanitation Appropriate for Education (SAFE) initiative in Pretoria. This is a partnership between government, the United Nations Children’s Fund, the Nelson Mandela Foundation and the National Education Collaboration Trust, to which the President invited the private sector to contribute.

A few days after Lumka’s death in March this year, the president instructed the Basic Education Minister Angie Motshekga to carry out an audit of school sanitation facilities and submit a plan to eradicate them within three months.

This led to the birth of the Sanitation Appropriate for Education – or Safe – initiative which government says will “spare generations of young South Africans the indignity, discomfort and danger of using pit latrines and other unsafe facilities in our schools”.

Ramaphosa says it is a tragedy that this initiative was sparked by the deaths of innocent children.

Over R100 million in pledges was raised at the launch of the sanitation appropriate for the education project.

Equal Education has said it is difficult to reconcile Ramaphosa’s promises with government’s failure to engage with them on the delivery of sanitation infrastructure.

They called this initiative ironic.

“Last week, the South African government announced that it will appeal the #FixTheNorms judgment that set deadlines for them to fix school infrastructure, including toilets,” read their statement.

It is difficult to reconcile the SAFE Initiative launched today, with the State’s lodging of an appeal, in which it argues that it is not obliged to urgently fix schools, and its unwillingness to release school infrastructure improvement plans timeously, necessitating a Promotion of Access to Information application.

Still, despite our application, the Eastern Cape has without explanation failed to provide its improvement plans, which should by law have been prepared by November 2017.

Just last month the State missed its date to file with the Polokwane High Court, a plan to eliminate pit-latrines in Limpopo as required in the Komape case judgment, instead filing a last minute application to extend the Court set deadline, said Equal Education.

THEBE MABANGA| A HEALTHY diet and balanced lifestyle, a commitment to your vision coupled with constant prayer and sheer hard work and study, that is...
Read more