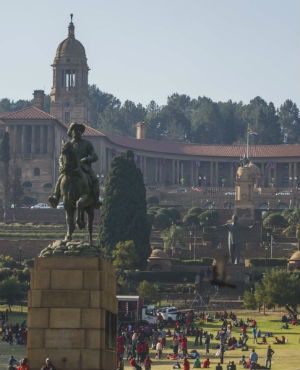 A small group of students from North West University have marched more than 300km to the Union Buildings in Tshwane to hand over a memorandum to President Cyril Ramaphosa, asking that he pardon all convicted Fees Must Fall students.

A weary Dikago Pule said he and 16 other students had started their journey last Wednesday, marching from Mahikeng in the North West to Tshwane, with the purpose of helping all students who were charged and convicted for their roles in the Fees Must Fall protests.

Pule said he was a former student representative council (SRC) president at the North West University.

“What we are saying here is [that] the president must pardon. Of course, we are begging him, because it is his constitutional discretion to pardon a person,” Pule said.

He also asked that Ramaphosa step in and have charges withdrawn against the students who had not yet faced trial, and that students who had been suspended or expelled be allowed to return to their universities to complete their studies.

On Wednesday morning, the 17 students joined a group of local Pretoria-based students in their final leg to the Union Buildings. Pule described the journey as very tough. He said they had relied on donations to keep them going.

Water, food and lodging had been a constant issue on their seven-day journey by foot.

In August, Justice Minister Michael Masutha said he would assist students who were being prosecuted for their roles in the protests, in order to pursue avenues other than outright criminal prosecution and guide them in applying for amnesty.

Masutha’s announcement followed a meeting with students, including Fees Must Fall activist Bonginkosi Khanyile, who had been camping outside the Union Buildings.

Khanyile, who was arrested in 2016, initially faced 13 charges, but was acquitted of nine others. He will have to return to court on October 16 for sentencing.

Masutha said the meeting with students was on the instructions of Ramaphosa.

“With respect to pardons, the department of justice and constitutional development supports the process by way of facilitating applications and draft memoranda on the basis of which the minister makes a recommendation to the president for decision.”

Khanyile said that the more than 560 students in the legal system, following the Fees Must Fall protests for free higher education, were not criminals.

“All what students have done was a reaction to what was happening on the ground,” he added.