This Ethiopian homegrown coffee brand is opening 100 cafés in China 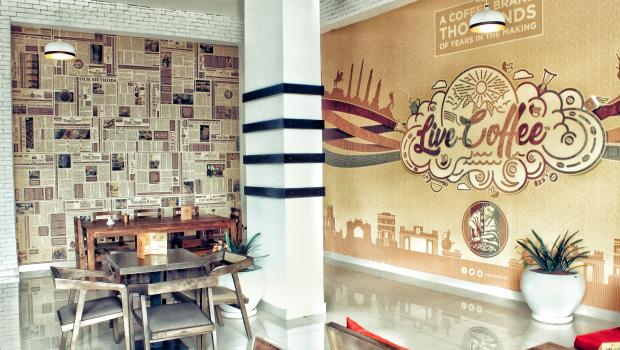 Bethlehem Tilahun Alemu has a dream: that everyone should one day taste hand-roasted Ethiopian coffee.

Widely acknowledged as the birthplace of coffee, Ethiopia is one of the world’s largest coffee bean producers and Africa’s top grower of the plant. Coffee is also brewed and drank in the Horn of Africa nation in elaborate ceremonies, often using crafting techniques passed down from generations over centuries. As an entrepreneur, Alemu always wanted to replicate this dynamic experience—what she calls “the magical process”—to coffee lovers worldwide.

And so was born in 2016 the idea for Garden of Coffee, a brand that uses artisanal methods to source, process, roast, and package Ethiopia’s legendary beans. Twenty workers at the company’s atelier in Addis Ababa currently oversee this activity, roasting five types of coffee beans only for individual orders and shipping them to over 20 countries including Russia, Sweden, Germany, and the United States.

This personalized roasting, Alemu says, helps preserve the quality of the coffee for the final customer, reduces the ecological footprint associated with factory roasting, and creates a business model that values local manufacturing. This is especially vital as Ethiopia takes crucial steps in improving governance and accelerating poverty reduction and economic growth through job creation.

The 2015 Quartz Africa Innovator also employs similar ethical practices with her shoe brand SoleRebels, which are made by locally-trained artisans in Ethiopia and shipped all over the world.

Alemu is now venturing out of Ethiopia. In August, Garden of Coffee launched in China, a tea-loving market that is increasingly turning towards coffee. Starbucks, Coca-Cola, e-commerce giant Alibaba, hedge fund manager Bill Ackman, and local Chinese start-up Luckin Coffee have in recent years all bet big on China’s nascent coffee scene. Java House, East Africa’s largest chain of coffee shops, also said in August it would capitalize on this increased demand for specialty coffee to supply the Chinese market.

Through a deal with Suzhou Reyto trading company, GOC says it will ship 12 tons of hand-roasted coffee to China in the first year. The company has also launched advertisement and marketing on the multi-purpose messaging and social media app WeChat, will soon place its product on the shopping site Taobao. But it’s big plan is  to open over 100 café roasteries across China by 2022. Through a subscription service, customers will also be able to receive their favorite coffee of choice in one, two, or four-week intervals.

By embracing traditional Ethiopian roasting methods and taking them globally, Alemu says she hopes to shape the “fourth wave” that is defining coffee’s evolution. The first wave involved the mass drinking of the brew, the second grew with the rise of a coffee culture through brands like Starbucks, while the third focused on artisanal coffee making. The fourth wave now focuses less on commercialization, more on long-term sustainability, besides promoting and preserving local ways of farming. Placing Ethiopian coffee at the heart of this movement is only pragmatic, argues Alemu. But it is also a judicious growth strategy: because of demand, Garden of Coffee is set to increase its hand-roasting artisans to 300 by 2021.

“We are doing this not only because hand-roasting coffee is an ancient art that we strongly feel is worth preserving and promoting, but because we believe this method of coffee roasting is the key to unlocking Ethiopian coffee’s true magical tastes,” Alemu tells Quartz. “That’s the critical distinction.”

NYAKALLO TEFU|  The Department of Basic Education (DBE) and all nine provincial education departments have agreed that accountability processes need be strengthened and standardised in...
Read more
News

NYAKALLO TEFU|  The Educators Union of South Africa (EUSA) has called for the  adoption of the “adjusted learner rotation system” at primary schools and have...
Read more
Editors Picks

230 individuals, including parents, support staff and children, from a school in Gauteng are in isolation following exposure to the Covid-19 virus during a...
Read more