US astronaut welcomed to the Cape Peninsula of Technology University 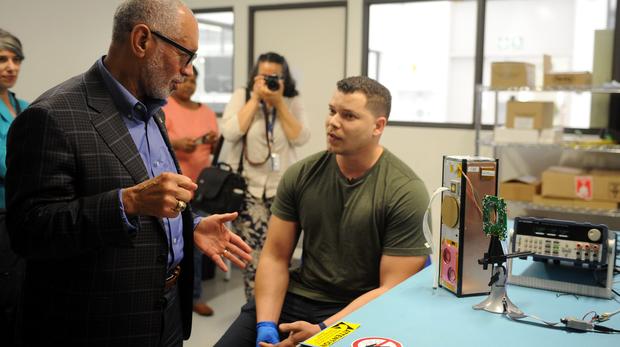 The Cape Peninsula of Technology Space programme on Tuesday hosted former Nasa head and astronaut Major-General Charles Bolden at its Bellville campus, where he gave a motivational speech to the students at the CPUT laboratory.

Bolden spoke to a large crowd of students and staff, telling them some of Nasa’s history before focusing on four areas of study.

He discussed their current and future projects, including experimental aircraft, research of the human body on the International Space Station, the James Webb telescope, Transiting Exoplanet Survey Satellite and the Parker Solar Probe, which is on its way to the outer corona of the sun.

Bolden was chosen by the US State Department to travel around the world for 12 months on a year-long programme. The department annually selects five people to travel in selected countries for an entire year and create relationships.

“We think this is an opportunity for promoting collaboration with the US in science, engineering and technology. In my case, it gives me the opportunity to come and meet with school kids from kindergarten to graduate school and talk about education, in addition to trying to promote commercial agreements and collaborations. It’s a kind of multi-purpose trip to South Africa,” said Bolden.

Bolden’s visit caps a busy year for CPUT’s space programme F’SATI. It’s about to launch its second nano-satellite into space at the end of the year.

The programme is becoming the southern African arm of Pan African University and a post-graduate training network of African universities.