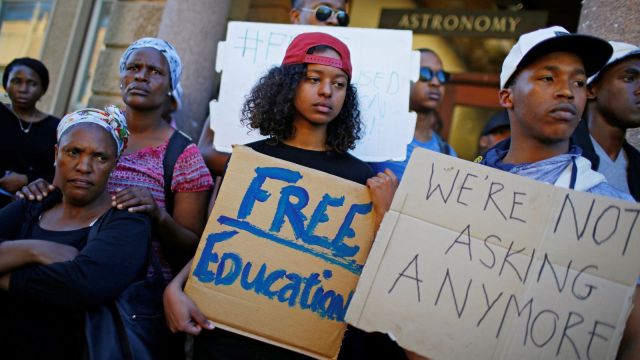 The disgruntled Students’ Representative Council (SRC) at Unisa has threatened to shut down one of the institution’s biggest campuses in Pretoria after their meeting with management collapsed.

This comes after the university management and the SRC failed to reach an agreement on the demands put forward by the students’ representatives.

EFF Student Command secretary-general Wadzanai Mazhetese said: “We are escalating now and planning to shut down the main campus in Pretoria. We are bringing students from all over the region to join us.

“I can confirm that campuses in KwaZulu-Natal, Nelspruit, Limpopo and Florida are closed. The Sunnyside campus is currently in the process of being closed.”

The SRC demands that all students who completed higher certificates in 2018 should be allowed to proceed with registrations from January 2 and for all qualifying students to be afforded space in the university.

Mazhetese said they are also calling for an urgent resolution of matters regarding Unisa qualifications not being registered with the South African Qualifications Authority (SAQA), and would approach stakeholders including the Department of Higher Education and Training to address qualification issues at the institution.

“The meeting we had yesterday ended without an agreement. We did not agree with the management and we have resolved that we are proceeding to meet the relevant stakeholders, like the Department of Higher Education and the SAQA.

“We think we might be able as a collective to find a resolution to the issues we have raised with Unisa. The meeting is supposed to be scheduled for Thursday (today), but we are awaiting confirmation from both entities,” said Mazhetese.

The meeting discussed a range of issues from academic programmes to financial aid. One of the biggest issues is the closing of some courses which has led to some campuses offering no more than five accredited courses.

“Some of the demands we raised included the issue of qualifications. Over 150 qualifications have been closed. We were expecting the university to engage us on that issue.

“They have not done that. We have proceeded to invite SAQA to reach out to Unisa to say these qualifications ought to be administered so that they don’t prejudice students,” said Mazhetese.

This also comes at a time when thousands of students are expected to finalise their registration for 2019. Unisa, however, said even though students could not access some of their campuses, they are encouraged to register online and direct their queries to the university’s toll-free number or to email.

Unisa spokesperson Martin Ramotshela said: “When people are being blocked off from accessing our campuses, it does not mean that registration must stop. Registration happens online. There is no need to extend the registration period, and none of us can foretell what is going to happen between now and the 25th.”