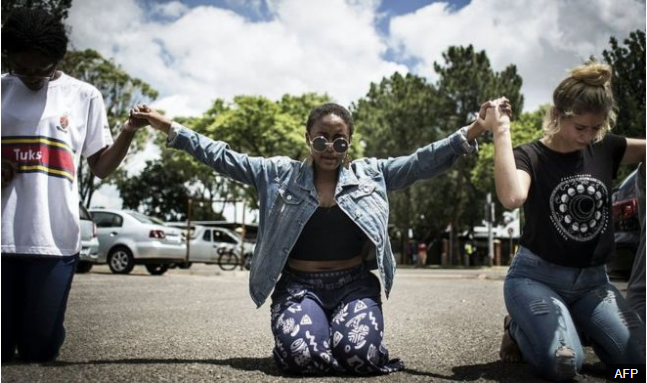 The University of Pretoria has dropped Afrikaans as its official language in favour of English.

The University of Pretoria told the BBC it needed to “transform the culture” to make it “truly South African”.

English is the preferred language of instruction for many in South Africa.

The word apartheid, which has now been internationalised and is in the Oxford Dictionary, is in fact an Afrikaans word.

The language is still spoken by millions, but it is hoped that this move will make the many more millions who do not speak it feel welcomed in one of the best academic institutions in the country.

Only 18-percent of students at the University of Pretoria want to be taught in Afrikaans. .

The new policy will only affect students registering at Tuks for the first time this year.

Some student bodies have welcomed the move and said the playing field will finally be levelled.

Black and non-Afrikaans-speaking students on Twitter have been discussing the new policy, with many sharing the humiliating and alienating treatment they say they were subjected to at the University of Pretoria.

There have been mixed feelings on Twitter but education officials aren’t moved.

Some of us started there in 1996, and had to learn Afrikaans by fire by force because our degree majors were only offered in Afrikaans

When asked about these testimonies, the University of Pretoria’s spokesman Rikus Delport told the BBC: “I’m sure there are incidents of that happening.

“That’s what led to the whole coming together, and saying ‘let’s decide how we go forward’. It flowed from that.”

Their constitutional recognition came with the advent of democracy, in an attempt to help end institutional racism and heal South Africa’s bitter historical divisions.

“In an ideal world we would like all languages to have equal status in teaching, but it’s not practically possible or feasible, so not a lot happens in other languages,” the University of Pretoria’s spokesman told the BBC.

“The university will still encourage multilingualism. We’ll offer support services to students in their enrolment – where practically possible – in their home language.”

Graduations and other official ceremonies will continue to feature the three languages already in use for those occasions – English, Afrikaans and Sepedi.

Demand for Afrikaans-language teaching is falling, according to the University of Pretoria, which says 85% of its students came from Afrikaans-speaking households in 1992, dropping to 30% in 2015. Only 18% of students said they wanted classes in Afrikaans at the last count in 2016.

“Afrikaans will be phased out over time,” the University of Pretoria’s spokesman told the BBC. “Students already in the pipeline will still continue getting their classes in Afrikaans.”

Although the changes came into effect at the start of the year, the university says the decision to switch to English was made back in 2016, prompted by high profile student campaigns across the country like #AfrikaansMustFall and #FeesMustFall.

That wave of protests also led to English being given equal status as Afrikaans at Stellenbosch University in 2017.

The pro-Afrikaner civil rights group AfriForum opposed the University of Pretoria’s proposed reform at the time, and has now accused the university of dishonesty in its changes to languages policy. The university denies this.

“They got it wrong. They associated it with [the appointment of] the new vice-chancellor – but I don’t know where they got that impression, because the change has been coming for some time”.

South Africa’s finance minister has also waded into the debate, saying people will regret the university’s decision to drop Afrikaans in years to come.

I publicly, and in my personal capacity, DISAGREE, with the phasing out of Afrikaans as one of the mediums of teaching at the University of Pretoria. As a country, you are shooting yourselves down. You will regret it in 30 years’ time. pic.twitter.com/qNe43ErSQz

“It’s obvious there are people who differ from us, who don’t agree with it – and we have to accept that,” the University of Pretoria’s spokesman said.

“This was a decision made by an extended consultation process over a long period of time, not something that happened overnight.”

The university is hoping to change building names at all its campuses within a year.