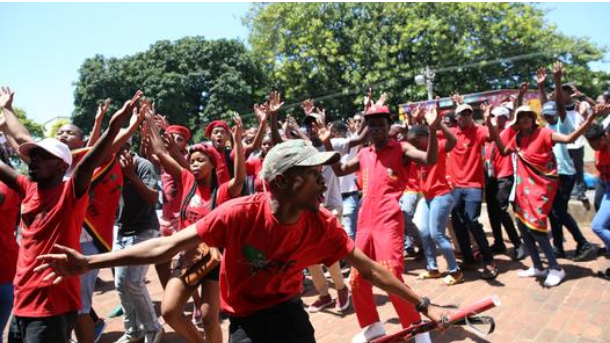 The South African Union of Students (SAUS) would continue with their ‘National Shutdown’ campaign this week, until government met all their demands.

Their decision followed a six-hour meeting with Higher Education and Training Minister, Naledi Pandor on Saturday.

SAUS is the umbrella body for Student Representative Councils, and called for a shutdown of the country’s universities last week, until financial assistance for students, among other concerns, were met.

The union wants students’ historic debt to be cleared, better accommodation, and the facilitation of more students at universities, among several other demands.

“We will stop the shutdown when we know that no one has been financially excluded from a higher institution of learning,” said Lwandile Mstolo, SAUS secretary-general.

Pandor’s spokesperson, Lunga Ngqengelele, said the minister had heard the students’ demands and advised them that some of it including the registration of students with historical debt could be resolved instantly.

SAUS president Misheck Mugabe said they would take Pandor’s decisions to the SRC leaders and discuss a way forward.

Following two weeks of protests, the Durban University of Technology is set to open tomorrow for the purpose of registering students and answering queries relating to financial aid and accommodation. But the academic programme remains suspended, according to a statement from DUT.

The University of KwaZulu-Natal also remains closed. Spokesperson Normah Zondo, said the university was assessing damages on all campuses.

The academic programme was suspended last Monday, after students protested for their demands which included financial issues, concerns over suitable accommodation for students, registration and academic issues.

Zondo said UKZN management had been engaging with student leadership and other stakeholders on the matters being raised by students.

“The situation on all five campuses is calm. The safety and security of the University Community is of paramount importance. The campus precinct is declared a lethal-weapon free zone.

Security Services on the campuses are urged to exercise restraint when engaging protesters. All five campuses are being monitored by University Risk Management Services,” said Zondo.

Her comments on campus security came after a DUT student was fatally shot during a protest outside the Steve Biko campus in Durban last week.

Mlungisi Madonsela, 20, died in hospital after being shot, allegedly by a private security guard from a security company hired by DUT.

A memorial will be held for Madonsela on Tuesday, as police investigate a case of murder.

GODWIN SIUNDU As I suggested last week, the world of letters widely recognises, rightly in my view, that Ngũgĩ wa Thiong’o, in partnership with Owuor...
Read more
Schools

THE Foundation for English; Mathematics; Sciences; Sports and Innovation of South Africa compared teachers to frontline workers, saying they play a role in society...
Read more