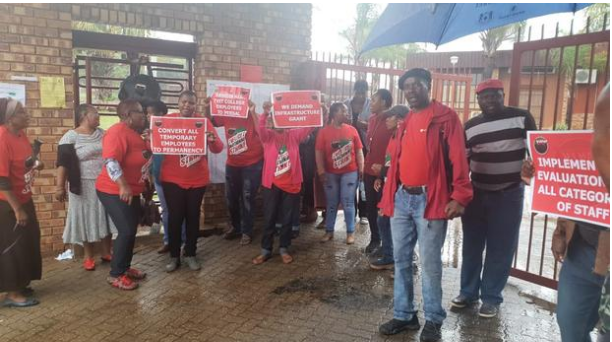 Even in the pouring rain staff members affiliated to the National Education Health and Allied Worker’s Union (Nehawu) kept to their word to go ahead with the national shut down of all TVET and CET colleges.

The trade unions’ members protested in small groups at the entrances of their respective colleges around the city, with some seated in their cars parked around entrances.

The national shutdown was announced by union spokesperson, Khaya Xaba, as they were of the view worker’s rights and demands were not being taken seriously by the Department of Higher Education and Training (DHET).

Alpheus Lebello, staff representative at Tshwane North College, Soshanguve campus, said all staff from lecturers, cleaners and administrative members were taking part in the national shutdown as all members were fed up with the unfair treatment meted out to them.

Lebello said members were tired of watching their employers, the colleges and DHET, simply choosing to ignore their problems.

He said workers who had worked for well over 10 years were denied service benefits.

Workers, according to Lebello constantly faced abuse from college CEOs and, or principals who had been given too much power by the department.

Enabling them to take full control and as a result were able to hire and fire staff “left, right and centre,” without any fear of reprisal.

“Principals and campus managers are colluding to put pressure on workers and threaten us on a daily basis.”

“We know in our own campus of seven lecturers who were dismissed between 2016 and 2017, for simply speaking up for workers rights.”

Motshekga: Schools Ready To Reopen, Waiting On Ramaphosa’s Address To The Nation On Sunday

Unicef devastated at images of unrest, riots and killings in South Africa

ECD workers to get their vaccine from 19 – 23 July