Mom upset after #SansSouci pupil’s suspension is upheld at hearing 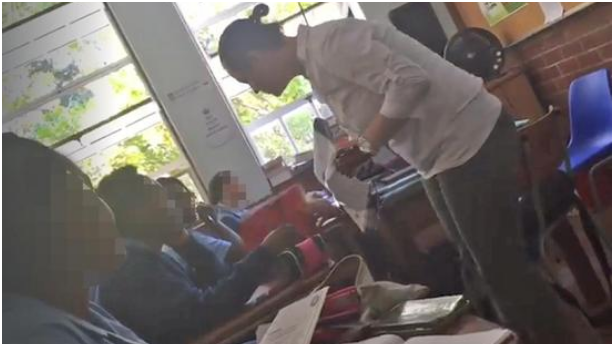 While the suspension of the Sans Souci Girls’ High School pupil who was slapped by a teacher in a video that went viral has been upheld, the fate of the teacher, who was also suspended, is still not known.

The duo’s disciplinary hearings were held on Thursday. The Chamber of Legal Students (CLS) representatives took on the Grade 9 pupil’s case because they felt the school had treated her unfairly from the onset.

In the video, the pupil can be seen shoving the teacher, who retaliates by slapping the teenager across the face.

Yolisa Nocanda, chair of the CLS, had expressed concern about the pupil’s case on  Cape Talk beforehand. “The learner hasn’t been afforded an opportunity to sit with a counsellor for the trauma she went through.

“She was not given sufficient learning material to catch up with her studies while she was at home, so Sans Souci has already messed up the case before it started.”

The pupil’s mother concurs. After her daughter’s hearing she addressed a crowd that had gathered outside, News24 reported.

“They (Sans Souci) never cared about my daughter. They never consulted her. They don’t care. The suspension of my daughter continues,” she said.

She said the principal called her aside before the hearing and “advised” her to take her daughter to another school.

On Thursday night, she did not want to speak to the media because she was “very emotional” because “my daughter was not given a fair chance”.

“The Constitution provides that every child has a right to education, but this school is depriving my child of an education,” she said.

Nocanda indicated that they had sent an email to the school before the hearing, requesting all relevant evidence that is going to be presented.

“One of the charges is violating the right of other learners to receive an education. Intimidation by verbal and physical threat to harm a person,” she said.

The other charges the girl faced were ignoring or failing to carry out specific instructions; actions which bring the school’s name into disrepute; violating the rights of other learners to receive education by disrupting classes, preventing teachers from teaching; and violating the rights of the teacher to carry out their task to the detriment of the school, staff, teacher and fellow learners.

Outside the school premises, a small group of supporters, mainly dressed in EFF regalia, defended the pupil and held placards which read, “No to child abuse”.

Chief executive of the South African Teachers Union Chris Klopper told the Cape Times on Wednesday they had spoken to the teacher and will assist her in the process.

“We had a long interview with her and we came to the understanding that she is upset and uncertain of what may emanate from the process, and that is understandable because it is a serious incident and it is all over the news and social media.

“She is our member and we will do what we need to do, as we would with any other member. We have to give her what is due to her. We have appointed an astute senior counsel, as well as an external lawyer to deal with the matter.”

He said they believe both the teacher and the pupil could have acted differently in the situation.