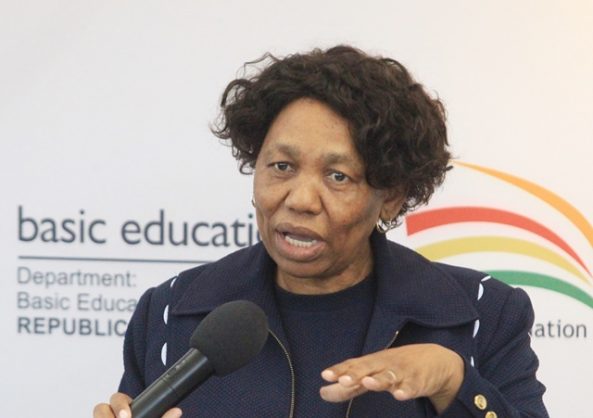 A joint sitting of the portfolio committees of Basic Education and the Police in Parliament have been briefed on measures to address violence in schools.

Basic Education Minister Angie Motshekga said: ” Our main problem is learner on learner violence, which is taking place inside the classroom.”

She added that “The rate of bullying is high in terms of international standards and poorly managed schools tend to have more incidents of violence.”

The minister said community involvement was key to stem the violence in schools.

“Studies have shown that where communities take ownership of their schools, the rate of violence is low. School violence most often occurs on school premises, but it also takes place on the way to and from schools. Bullying is increasingly taking place online and with the use of mobile devices,” she added.

In the latest incident of school violence, a grade 10 learner was stabbed to death by a fellow pupil at the Tokelo Secondary School in Evaton over a cell phone.

“It is based on a social ecological systems model, which locates the school within its broader community; it relies on collaboration and partnership. South Africa joined the Safe to Learn global campaign to end violence in schools, in partnership with UNESCO and UNICEF,” he said.

President Cyril Ramaphosa has declared school safety as one of six apex priorities for the sixth administration.

The joint committee sitting heard that two protocols were introduced to address the challenge.

These include the Management of sexual abuse and harassment and Management of Corporal Punishment in 2018; and the Collective Agreement which simplifies and consolidates prosecution of teachers accused of sexually abusing learners.

These include the vetting of teachers and other staff and identification of hotspots for most at risk schools.

Learner Support Agents (LSAs) will be provided to all hotspot schools together with the provision of counselling services to victims (and perpetrators) of violence and abuse, the Basic Education department said.

Other measures include considering learner safety when planning school infrastructure, as well as taverns and liquor outlets in close proximity to schools, in partnership with the Department of Trade and Industry, SAPS and South African Local Government Association (SALGA).

Measures also include search and seizures in partnership with the SAPS and the provision of security guards to schools at risk.

Motshekga reiterated that community involvement was critical and that parents needed to play their part and support schools.

“The issue of security guards and the police are welcomed, but the key challenge is what learners do to each other,” the minister said.

The SAPS said school based crime prevention would be intensified and that the collaborative agreement with the DBE would be revised in order to make it more effective, the MPs heard.