#MatricResults: Son of a street hawker becomes a top achiever 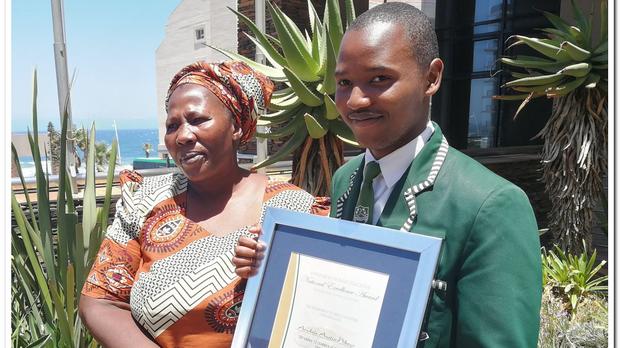 Among the proud parents at the ceremony was 57-year-old widow Margaret Nkayi from Polar Park in Elliot, whose son Avukile Nkayi is one of the top four Eastern Cape achievers for 2018. Avukile bagged seven distinctions, making him the number two star pupil from South Africa’s quintile three schools.

At the awards ceremony, Margaret could barely contain her joy.

“I am very grateful to all the schools and teachers who played a part in shaping my son’s future,” she said.

“The teachers at Ulundi Primary School organised him a bursary to do his high school at Nyanga [High School] and when he got there he came on top.”

Margaret has been making a living as a street hawker since 1991, after her then-husband died in 1990. The family currently share a two bedroom RDP house with other relatives. “Now it is just a matter of time before we are out of poverty. I have been frying leftovers and selling apples for us to put food on the table,” she said.

Avukile said his achievement followed after he dedicated time to help other pupils.
“The more I helped other pupils, the more I developed my own understanding.” He intends to study medicine at the University of Cape Town. “After completing [medical studies] I want to specialise in neurology and then go back to serve my community.”

His interest in neurology stems from when his elder brother became mentally ill, and he now wants to help people such as his brother.

“I attended Oscar Mabuyane maths camps in December 2017. Before then my maths marks were below 80 percent, but since I grasped what we practiced during the the camp I achieved above 90 percent,” said Avukile.

His advice for pupils starting matric in 2019 is, “Do not let your background hold you back, be inspired to succeed and change your situation.”