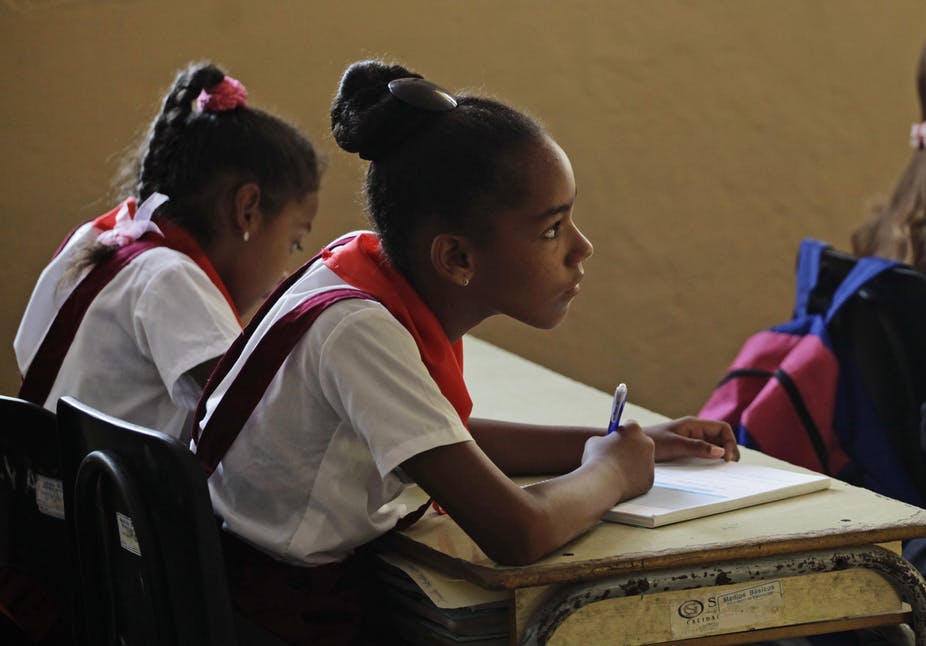 About 50 children sit on a bare classroom floor in front of their teacher in what could be any lesson in Mozambique, except that they are not learning in Portuguese, the country’s official language.

The class is being taught in Changana, a local language spoken in southern Mozambique and in the capital Maputo that is closely related to Tsonga spoken across southern Africa.

Wearing backpacks and surrounded by a pile of books, the children aged six and seven are gripped by the teacher’s every word – a concentration level almost impossible to achieve in Portuguese.

“Kids are breastfed by mums speaking Changana and grow up until the age of five speaking Changana,” Helena Joaquim Arguenha, their teacher at Mitilene primary school in the rural district of Manhica, about 80km from Maputo, told AFP.

“It is very important that the children learn in their native language because it opens up the kid to learn more.”

Arguenha has taught at the government school for six years, but only last year started teaching in Changana as part of a Food for Knowledge (FFK) project funded by US aid and the local action group ADPP Mozambique.

Almost all teaching in Mozambique is in Portuguese – a legacy of the country’s colonial era before independence in 1975 – but the majority of Mozambicans speak one of more than 40 local languages.

The ministry of education told AFP that only 10% of children start school knowing Portuguese but now around 1 300 primary schools out of 13 000 offer some bilingual teaching.

Shy and scared to speak

In Arguenha’s class, only one child spoke Portuguese at the start of the year.

But speaking in Changana, communication between teacher and pupils is fast and lively, with children throwing their hands up high to answer questions.

“In Changana the students are more creative, they understand better and they are not shy. They speak freely, they express themselves,” Arguenha said.

“When it is in Portuguese they are very shy, they are scared to speak and hide themselves.”

The NGO Associacao Progresso, which works to improve literacy in the country, has first-hand experience of how much children struggle when they have to learn in a language they do not speak fluently.

“What often happens is that there is no communication because the teacher speaks Portuguese, but the student doesn’t understand,” said Alcina Sitoe, education officer at Associacao Progresso.

“If you don’t understand what is being taught, it is difficult to learn anything.”

The Mozambican government has acknowledged the problem and in 2017 introduced reforms aimed at having classes taught in local languages, although some parents often want their children to be taught exclusively in Portuguese.

They later switch to the official language at about the age of 10, after children have had time to learn it.

“We could see that these kids got better results than the kids who had monolingual, Portuguese teaching,” Gina Guibanda, the government’s director of primary education, told AFP.

“When the teacher in the class spoke a language that the kids had never heard spoken, for the kid that was horrible.”

The UN education agency Unesco has long encouraged mother tongue instruction in primary education, with research showing that it is the optimal language for literacy and learning.

In the developing world, children are more likely to enrol and succeed in school. In particular, girls and rural children with less exposure to a dominant language stay in school longer and repeat grades less often if they learn in their native language.

Many rural schools have no trained teachers to give lessons in local languages or any translated books.

Government policy is for teachers to have three years of training, but that has been cut down to one year due to budget shortages and the nationwide shortage of all teachers.

“It is not enough. Teachers graduate while still having a number of problems,” said Francisca Samboca, education officer at Associacao Progresso.

“In reality, in all the rural areas these schools can only be found in the district capitals.”

For Arguenha, the new approach was made easier because ADPP and FFK provided specialist training and materials in both Changana and Ronga, the other local language spoken around Maputo.

ADPP and FFK now work with 101 schools in four districts in Maputo province, with more than 5 000 children taking part in the programme and more than 67 000 books have been distributed.

But the difficulties for teachers switching between languages can not be estimated.

“In the beginning it was a challenge,” said Arguenha. “I really needed to concentrate when using the material and I needed to use vocabulary I didn’t normally use.”

NYAKALLO TEFU|  The Department of Basic Education (DBE) and all nine provincial education departments have agreed that accountability processes need be strengthened and standardised in...
Read more
News

NYAKALLO TEFU|  The Educators Union of South Africa (EUSA) has called for the  adoption of the “adjusted learner rotation system” at primary schools and have...
Read more